Raiders of the Lost Con 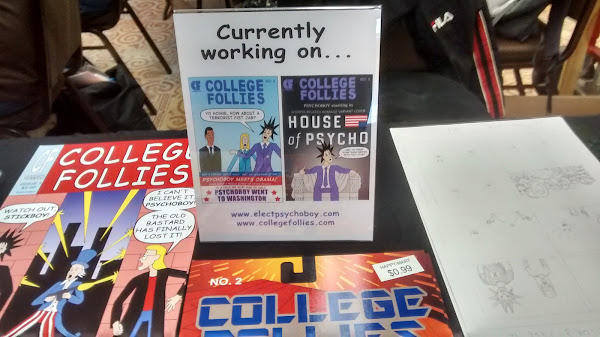 With that title, I really wish I'd gotten a shot of the guy dressed as Indiana Jones. Anyway. so I did Jay and Eddie's Comicshow again. A well put together show like usual.  We actually had a bigger space this time at a new location. There was great mix of local talent with many comic and collectible vendors. Heck, we even had Ecto 1 parked outside from the Carolina Ghostbusters and an actress from this season of Walking Dead who had a table.

All we seemed to be lacking were attendees. I was working on a page (while struggling to stay awake, I was pretty beat), but almost every attendee I saw I'd seen at numerous conventions before. A wider audience with new faces just didn't seem to pop up and regulars didn't seem to appear in numbers as large as I expected. The creators I talked to seemed to have a slow day. Vendors probably had a better time of it, since attendees tended to head towards them.

I had a banner across the front of my table and my tall banner to the ceiling and I still felt invisible. I'm not why more people didn't come out. It did suddenly turn bitter cold again, so maybe the weather deterred people, and...I don't know maybe people have something against going to conventions in March. Maybe they're giving up pop culture for Lent or something, I don't know.

Anyway, hope they get a bigger response next time because it certainly deserves it. I'm thankful for the few interactions I had (I had some fun showing my Power Ranger parody issue to some kids) and sales I got. And I did get pencils done on the first page of issue five. I'll try to ink it today. I hope I'm feeling a bit more chipper at the next convention, which is only a month away! 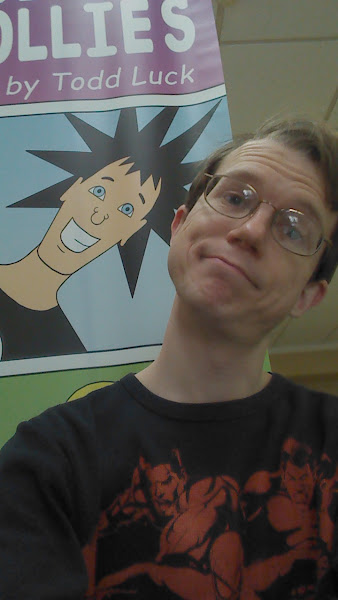 Posted by Unknown at 1:03 PM No comments:

How Not to Greet a President! Issue Five's Cover is Done!

The regular cover for issue five is done! I actually started the House of Cards parody variant cover back in November at NC Comicon and finished it in January after taking a holiday break. Unfortunately, my day job has been so bad since then, it's kept me from working on the comic, so this is the first thing I've created in months. The long hiatus didn't make it any easier, but the results are still solid.

No story where Psychoboy becomes a congressman would be complete without him meeting Obama. So obviously that had to be on the cover, joining the long line of Obama covers in comics. I created the whole cover in one weekend.

I went around and around on how to make Obama look right in the art style of the series and eventually landed on a version that influenced by how artists at Archie drew him in several issues of their comics. Actually their style fits College Follies pretty well (Hm, Jughead meets Psychoboy would be epic!).

I wanted this to be a throwback cover to old 60s comics with tons of narration on the cover, back when Stan Lee would have entire sales pitches on the cover begging you to buy the damn thing. I decided to go with a patriotic theme behind the narration, similar to Psychoboy's campaign materials on electpsychoboy.com and on social media.

Oh, and by the way, the cover is actually really tame compared to the "Psycho meets Obama" gag in the story.

Anyway, next weekend I'll be penciling the first page while I'm at Jay and Eddies Comic Convention! 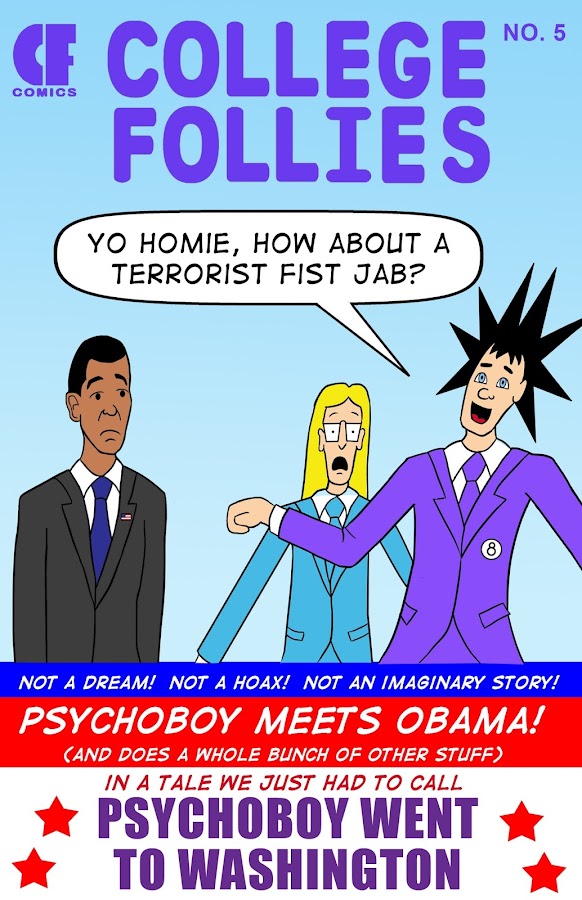 Posted by Unknown at 5:00 PM No comments:

Did pencils and inks for the regular cover on College Follies #5 ,which has Psychoboy meeting President Obama. I'm going to wrap it up today, so I'll have it done for the convention next week. 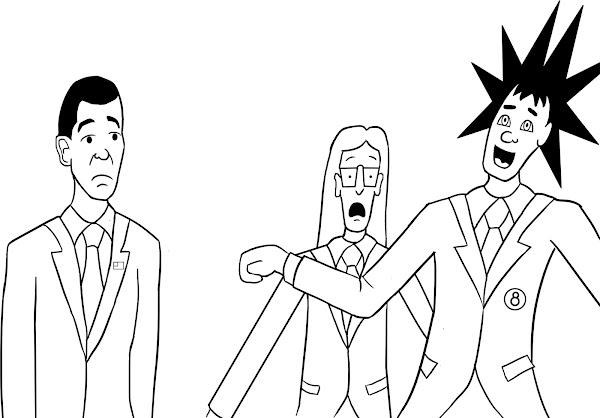 So the script for issue five is done. It was a lot of fun to finally type up the conclusion of Psychoboy's congressional odyssey. I've had the story in my head since I did issue four last year. It feels good to finally have all that dialog on paper.

One thing I can never judge until I write is how long the story is. This one ended up being 16 pages. The good news is it keeps printing costs in the range where I can still charge $3 for the print edition, The bad news is a story of this length works against me getting it out this year. It'll be pretty tight but we'll see how long it takes, even with work eating up most of my time and energy.

I'll be easing back into, figuring out how to get back into it and work comic production into my life now. So be patient and I'll keep you posted on how things go.  I'll probably try to get the cover and inside cover done in the next week or so before Jay and Eddie's Comic Convention on March 28.

Posted by Unknown at 6:00 PM No comments:

Working on the script for Issue Five

Currently working on the script to issue five. It's going slowly, a few pages at a time.

I planned to start back on the comic in January after a holiday break, but things have gotten crazy at my day job in ways I never thought possible. I simply haven't had the time to work on it during the weekdays, and I just haven't had much left in me to give on the weekends. I really wanted several evenings a week to work on it, but that's not happening anymore. I'm just going to have to adjust, and start working on it slowly, painfully, a little at a time in those few stolen hours I get.

It's going to take awhile, but it's going to get done at some point in the year. Writing the first six pages of the script was the first time I've truly smiled this year.

Posted by Unknown at 9:34 PM No comments:

Alright, so there's been a huge delay in production on issue five, due to complications in my personal life. I'll say more about that in my next post, but regardless of what I'm able to produce, I will definitely, 100% be attending two cons in the next two months. I'll be selling print copies of the regular and variant editions of the first four issues and some other goodies at both.

So first of all, I'll be at Jay and Eddie's Comic Show on Saturday, March 28 at the Winston-Salem Hotel and Spa (formally Ramada Inn North), 3050 University Parkway in Winston-Salem, NC. The show runs from 10 a.m. to 4 p.m. Admission is $3. It's been a smaller show in the past, but a really good one with a lot of good comics, collectibles and creators there.

Then on Saturday April 25, I'll be at the Winston-Salem Comic Con at the Winston-Salem Fairgrounds Annex, 421 W. 27th Street, Gate 9 in Winston-Salem (duh!). It runs from 11 a.m.- 5 p.m. and admission is $2. This is a sizable one day con that keeps getting bigger. They'll be tons of creators and comics-- they even added panels last time!

Both are great cons, I hope to see you guys there! And I'm going to slowly get back into making issue five soon, Psychoboy's starting to feel neglected. More updates on that soon.

Posted by Unknown at 4:20 PM No comments: 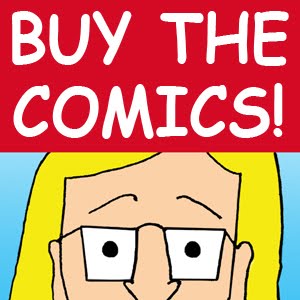 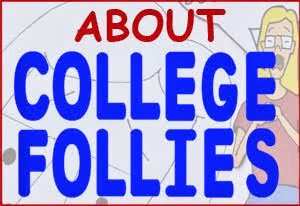